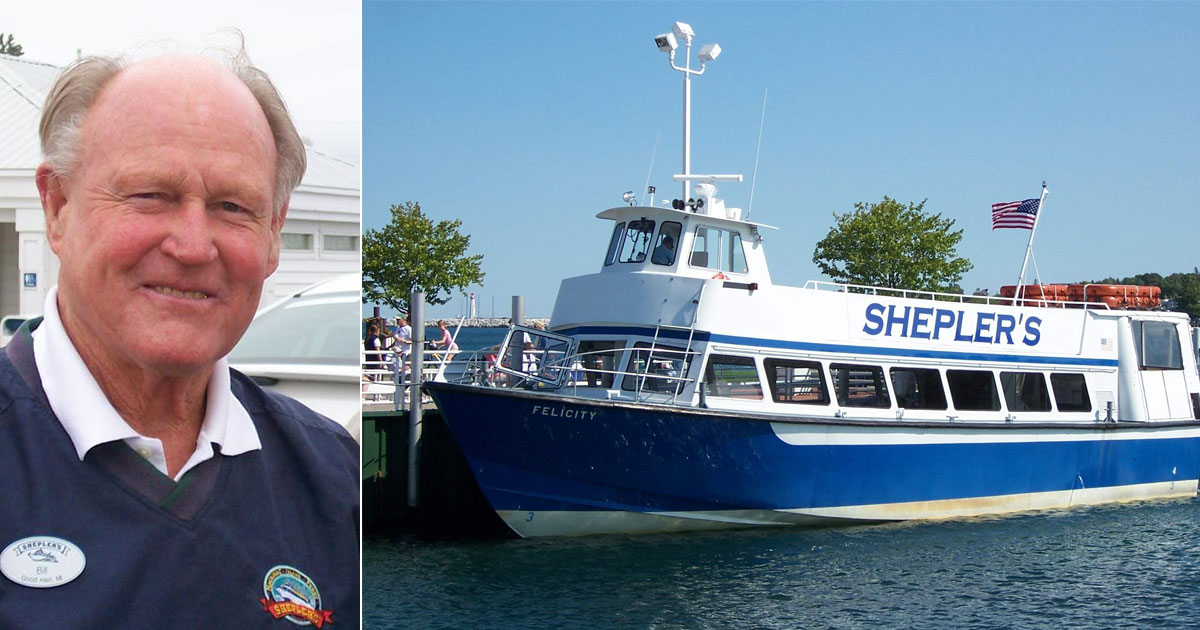 Family-owned, family-operated Shepler's Mackinac Island Ferry celebrates seventy years in 2015. The strength of character and sense of service passed down through three generations have been pivotal in helping this company stay the course. Group Today looks to CEO Bill Shepler for some history on his piece of the travel industry and the family business, the subject of the true story Undefeated.

The beginning is when my dad got out or the Merchant Marines in World War II—he was born and raised in Mackinaw—we were living in Wyandotte. He came to Mackinaw to take a job. He had a full captain's license and could take any boat, any job, on the Great Lakes. He was the captain of the Algoma, running between Mackinaw City and Mackinac Island—it could carry 600, and was an old steam-powered, coal-fired vessel. He realized there could be a better way. He acquired a speedboat—a 28-footer—from down near Detroit and brought it to Cheboygan. He pulled it out of the water and worked on it all winter. He completely refurbished the boat. It was gorgeous—like it had just come out of the factory! We went into the charter business. The boat carried ten, and luggage was stowed in the engine hatch—the only place we had to put the luggage.

We acquired another boat. I got my license. We both drove charters every night, getting people to and from the island. Then there was a cruiser that Dad had become acquainted with; now, we have a roof over or head, two engines, a radio—we're flying high! This was in the early '50s. He built another boat. We had two cruisers, two speedboats, all fast. We were still in the charter business, but dying on the vine. We did quite well with taking people out to watch the construction on the Mackinac Bridge, but after the bridge was finished we were having troubles.

I went to college, did a stint in the Army, came home, and thought we should have a ferryboat schedule. Mom thought the same thing. We'd been using a ferry dock on the island, and now were "competition." We started carrying people. People wanted to go fast, have a nice ride, have a nice experience—we started making money. Dad found a piece of property on the island, built a small dock, and—crude as it was—we were really on our way. Cruisers were not capable of handling inclement weather; there were days we couldn't run. We needed a big boat. Dad knew of an architect from the UP—J.B. Hargrave—who had an office in Palm Beach. He was making great, fast yachts, and he designed us a boat. It was fast, carried 120, was 60-foot long—we were in seventh heaven. We had it built by Cam Craft, near New Orleans, and brought up to Michigan and put it into service.

That was the start of high-speed service on the Great Lakes. From there, it's kind of history—over seventy years.

I immersed myself in the travel industry. I've been very involved. I was appointed to the Michigan Travel Commission by Gov. John Engler. I was instrumental in changing the pre-Labor Day public school starts, which were killing the industry—it was an accomplishment for us and for the travel industry.

Seeing the Shepler story in Undefeated means a heck of a lot! I just wish my mother and dad were here to read it. As soon as Don Steele (Undefeated co-author) met us, he said we had to write a book. We're proud of our association with Don. We've always known we had quite a story! It's one of constant struggle, and of survival and winning.

Dad and Billy—my youngest son—and I brought the Capt. Shepler, named for Dad, up the Mississippi River. We had an incident in Chicago, in an area with a lot of barge traffic. I'm in the pilothouse with my dad—he was driving—and there were four buttons on the dash, for stopping and starting the engine and a horn button. Dad was looking for the horn button to blow a signal to go around a tug, and was heading for a start button, which would have killed the engine. I'm watching him looking for the button to blow the horn—and I thrust his hand aside. At that moment, it destroyed my dad. I can see that moment, right now. He was upset, he was embarrassed, and he walked out of the pilothouse. I followed him out and apologized, but it didn't make any difference; I had destroyed The Captain. It's had a lasting impression on me, and it brought us closer together. It taught my kids to be respectful.

When my dad was ailing—when we brought the boat up the river—my mom said we had to name this boat after my dad. With our newest boat, which we'll christen July 12, we thought, "What are we going to call it?" I was talking with a friend, Charlie Gamble, who said, "You've got to call it Miss Margy," for my mom. And it stuck. My mother was a white tornado; just a whirlwind! She was everyplace. She kept everybody in line. She was a great mom. Mother and dad now have namesakes in both boats. They were the founders, the visionaries. They kept us going in tough times. They had the fortitude.

We carry probably fifty percent of the market to the island. Recently, though, we were within millimeters of going out of business—through no fault of our own—because of the city of Mackinac Island and one attorney. What was so exciting was that the website exploded with people coming to our side of the story, coming to our aid. One meeting we had, the city council was on the verge of deciding on one ferry line. We won the struggle. But we weren't getting our franchise. We sued in federal court—and twenty-four hours before our appearance, we got the franchise. We got a bill written that would take the ferry business power from Mackinac Island. We wrote a memorandum of understanding and have a lengthy franchise that works for everyone. We're home free, so to speak.

The greatest challenge I have is turning the business over to the kids! Sure there's staying alive and beating the competition and making money—that's all there. We had four children; a daughter died. They all have worked for us, left us, and come back; it was their decision. In the transformation of the family business from the first generation to second generation, fifty percent of businesses fail. From the second to third generation, ninety percent fail! I'm living that right now. But for me to say, OK, Chris, Billy and Patty, it's yours—that was a tough nut to crack. It's been me, for fifty years. Mom and Dad let me have it, and do my thing. There was never any discussion or papers signed; the transformation was fairly painless.

The children know the business better than I do. I made a decision at our Christmas party two years ago. We invite all of our cast to come, with their families—150 or so people—and we have dinner, celebrate the season, talk about our accomplishments, give awards. I've always given the closing speech, and I brought my children next to me, on the stage. None of them knew what was going to happen. The time has come, and I've elected to turn the entire operation over to these kids. They will now own the business and be the guiding light. It was a telltale moment—something I'd been thinking about for about ten years. I couldn't accept it, but finally accepted it, wanting the business to survive. We've built the business with a strong brand of service, fairness, and speed. We usually go to Disney every year. I'll strike up conversation, and find out if people have gone to Mackinac Island. Then, I ask how they got there. "Well, we took a boat, it was blue and white, it was fast ..." Service, speed, cleanliness—all the good stuff! The brand is strong, we're proud of the brand, and we're proud of our association with the state and what we've done with the state.

It's a joy to talk to people and to provide what they want. It enhances their experience and their vacation, and they come away with great memories. Handling a staff—we're fairly adamant when you decide you want to work for Shepler's, we'll interview you, maybe twice. And if we have any questions, any doubts, we aren't going to hire you. We'll interview perhaps 250 and hire thirty. It's not so much the job, but the act of being part of the system. When you work for us, you wear a costume, not a uniform. You're a cast member, not an employee. You have to have a haircut, be tidy. There are many standards, and it makes everybody equal. It's fairly cut and dried—no room for interpretation. Our employees have telltale tan lines. Everyone knows who they are, and they're proud of those tan lines.

We keep people happy and motivated, and they are.

"Traditions" is a class I teach for all new recruits. Its orchestrated around what Shepler stands for: our culture and the Shepler service model. We'll have several speakers come in from our cast. Many years ago, we started a service model in Mackinaw City, and I gave the program. I modeled it on Traditions, and it caught on rapidly. I gave this presentation to groups in Minneapolis, Alpena, the UP, the Soo, Detroit, Grand Rapids, Boston, Ft. Lauderdale, and gave it to the state DNR for 450 people ... I didn't promote it; it just caught on. We're proud of that. A lot of people, I think, have fashioned their service model on our service model. It seems to work.

The company is constantly making changes to update the service product. The theme is: How do we make it easier? How do we make it more enjoyable? How do we enhance the experience? How do we make it not so expensive—so everybody can enjoy it—and still make money? Michigan is a great state—it has so much—and we're proud to play a part. Miss Margy will be the ultimate in high-speed transportation. It will be very fast—40 mph—and carry 285. It will have an air-conditioned cabin for comfort on hot days, a lot of electronics, and will incorporate a ton of soundproofing to eliminate vibration and engine noise, so the experience should be even more enjoyable. It's being put together by Moran Ironworks in Onaway, in Northern Michigan. It takes 30,000 hours to build this boat. Think of the economic impact on Michigan! By and large, most of the equipment and the systems onboard are from Michigan.

It's been a rollercoaster ride, but it's been so darned much fun! From a family point of view, we raised four children and my wife stood beside me and understood what I was trying to do. She stood beside me. The four kids stood beside me. It's a family affair. It was a lot of how we raised them, perhaps: Tell the truth. Stand by what you say.

© 2022 Groups Today - All Rights Reserved. Read our   Terms and Conditions