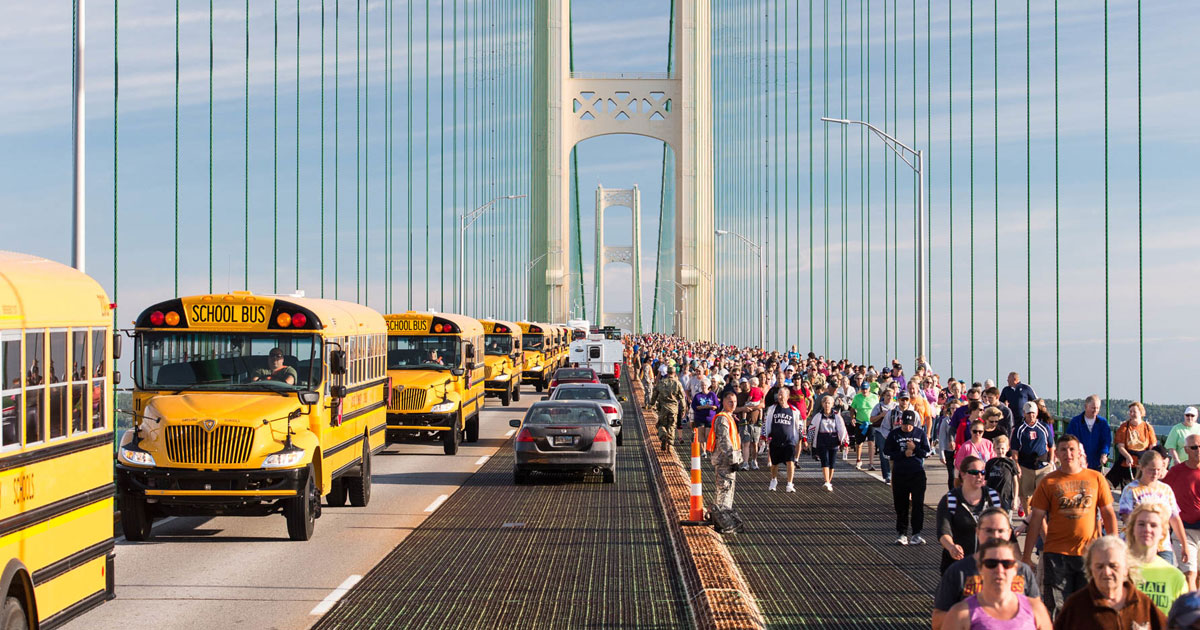 In the spirit of cool and unusual Labor Day celebrations, we have an anniversary to celebrate in Michigan this year: The Mackinac Bridge Walk's 60th.

Each Labor Day, tens of thousands of pedestrians from Michigan (and beyond) have gathered in the Straits of Mackinac to walk the five miles (26,372 feet, to be exact) of the "Mighty Mac," which connects Michigan's Upper and Lower Peninsulas and currently ranks as the longest suspension bridge in the western hemisphere, and the fifth longest in the world.

We're not exactly sure why Michiganders took to walking across the bridge, but the tradition began in June 1958 during the Mackinac Bridge's dedication ceremony, after its initial opening to traffic in November 1957. The event moved to Labor Day the next year and has grown from a mere 68 walkers the first year to an average of 40,000 to 65,000—an estimated collective number of over 2 million participants.

In celebration of the Mackinac Bridge Walk's 60th anniversary, here are 60 things to do while traveling the two pleasant peninsulas—from the tip of Michigan's Lower Peninsula to the top of Michigan's Upper Peninsula.

1. Walk the Bridge, of course! The walk begins at 7 a.m. in St. Ignace, on September 4, 2017. 2. Get a great view of the Mighty Mac at Bridge View Park.3. Hop on a ferry to Mackinac Island.4. Eat fudge. 5. Take a Sunset Shipwreck Cruise through Mackinac Straits Island & Diving Charters.6. Soar over two waterfalls on Mackinaw's longest zipline at Adrenaline Falls Zipline Adventure.7. Fly above the Straits of Mackinac with Mackinaw Parasailing.8. Step into the 1770s at the reconstructed fort and fur-trading outpost at Colonial Michilimackinac.9. Step into the 1880s and experience rifle and cannon firing demonstrations at Fort Mackinac.10. Go to the very top of Mackinac Island and tour the reconstruction of Fort Holmes.11. Tour the USCG ICEBREAKER MACKINAW WAGB-83 (aka "The Queen of the Great Lakes").12. Enjoy an expertly narrated Mackinac Island Carriage Tour.13. Try to solve the mystery at the Mystery Spot.14. Explore the 1892 Old Mackinac Point Lighthouse, fondly known as the "Castle of the Straits."15. Find your way through the Maze of Mirrors.16. Enjoy the sights and sounds of historic Mackinaw City on the Mackinac Old Time Trolley.17. Walk through the years of great change, from candles to electricity and beyond, at the Mackinaw Area Historical Society.18. Watch two rival camps compete for the title of "Bull of the Woods" in chopping, logrolling and more at the Jack Pine Lumberjack Shows.19. Bear witness to a working, water-powered sawmill cut lumber and hand-sawing demonstrations at Historic Mill Creek.20. Browse over 50 specialty shops at Mackinaw Crossings.21. Climb the world-famous Castle Rock!22. View live whitetail deer with fawns in a natural setting at Deer Ranch—the oldest whitetail deer exhibit in North America!23. Discover fascinating maritime exhibits and a 20-mile panoramic view at the Museum Ship Valley Camp & Tower of History.24. See 30 bears and have your picture taken with cubs at Oswald's Bear Ranch, the largest (bear-only) bear ranch in the United States.25. Get spooked by the horrors of the Mackinac Island's past at The Haunted Theatre. (Don't let the name deceive you. No shows here. It's a haunted house).26. Improve your snowmobile IQ at the Top of the Lake Snowmobile Museum.27. Bike around Mackinac Island.28. Take the reins and tour Mackinac Island by horseback. 29. Drive your own buggy. 30. Learn about Mackinac Island's unique horse culture at the entrance of the Mackinac Community Equestrian Center. 31. View fine and decorative arts, from Native American baskets to present-day paintings, at the Richard and Jane Manoogian Mackinac Art Museum. 32. Reflect upon the religious history of Mackinac Island at St. Anne's Church Museum. 33. Learn about carriages at Surrey Hills Carriage Museum, which features a working blacksmith shop! 34. Be fascinated by butterflies at Wings of Mackinac. 35. Stay fancy at the Grand Hotel. 36. Practice putting—mini golf putting, that is—at Trappers Creek Adventure Golf.37. Ride through the Soo Locks on the Soo Locks Boat Tours.38. Take a walk on the wild side at Garlyn Zoological Park.39. Paddle the crystal-clear Sturgeon River (the fastest in Michigan's Lower Peninsula) with Big Bear Adventures.40. Escape You Fate. Just try. 41. Get a Picture of Pictured Rocks cruising. 42. Hike along Pictured Rocks shoreline. 43. Go antiquing in Marquette.44. Bring the family together at the Upper Peninsula Children's Museum. 45. Dress like a Yooper. 46. Check out the exhibits of Great Lakes Artists at Michigamme Moonshine Art Gallery. 47. Go camping. There are so many places to go camping.48. Tour the sites associated with the filming of the 1959 movie Anatomy of Murder. 49. Eat a pasty. Or two. Or three.50. Cliff jump off Black Rocks. 51. Marvel at Tahquamenon Falls ... 52. ... and eat at the brewery. 53. Tour the Marquette Maritime Museum. 54. Take a sea kayak out on Lake Superior. 55. SCUBA. 56. Take a selfie at Mackinac Island's Arch Rock.57. Hit the runway for a scenic air tour with Great Lakes Air, Inc.58. Find the elk. 59. Rent an ATV. 60. Get a great view of the stars (and maybe a glimpse of the Northern Lights) at Headlands International Dark Sky Park—one of the first 10 Dark Sky Parks in the world.

"If you seek a pleasant peninsula, look about you." Because Michigan has TWO. Here's to 60 years of coming together.