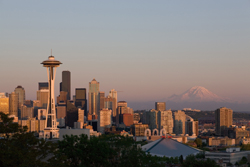 Known by many as the heart and soul of the Pacific Northwest, Washington offers one-of-a-kind travel experiences for all types of groups. Unparalleled natural beauty and thrilling outdoor adventures are often highlighted in the state.

Washington's long-standing history of pioneers and trailblazers comes to life daily in the artistic and cultural diversity that unites the state's big cities and small towns. Kick off your arts and culture itinerary at the Seattle Art Museum. After experiencing indoor galleries, stroll through the public art at the Olympic Sculpture Park, which is set outdoors amidst panoramic views of the Puget Sound and Olympic Mountains.

Another great way to experience Washington's cultural landscape is by attending one of its many festivals. For nearly a month beginning in May, the Seattle International Film Festival invites cinema fans to take in approximately 550 screenings of feature and short independent films from all over the world. Experience the beauty of Washington in bloom at the Skagit Valley Tulip Festival and the Spokane Lilac Festival, both held in spring.

Visitors to Washington can savor the richness of world-renowned food and wine destinations, as well as a variety of locally grown produce, such as Wenatchee apples, cherries from Green Bluff and sweet onions from Walla Walla. Historic Pike Place Market, which celebrated its centennial anniversary in 2007, is a must-see waterfront mecca for foodies.

"I was on Diane's Market Kitchen Chef's Tour of Pike Place Market, and I learned so much about the vendors and the market itself," says tour-taker Janet Smith. "I had a blast 'making' lunch. I plan to be back for more."

Read more about the arts and flavors of Washington in the Groups Today digital edition.