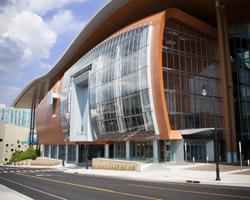 What’s New for Groups? With good reason, many tour groups heading to Nashville gravitate to the Disney-like Gaylord Opryland Hotel, with its massive atriums, gardens, restaurants, shops, and shows. Some venture downtown to the Gaylord-owned Wildhorse Saloon. But to absorb the real Music City, consider spending an entire tour downtown, where you’ll experience classic attractions and new ones as the city continues to grow and thrive. Between the new attractions, a centerpiece hotel, and the popularity of the ABC show Nashville, group tours are booming.

Music City Center, Nashville’s new convention facility, is adjacent to Bridgestone Arena (home of the Predators NHL team) and the Country Music Hall of Fame and Museum. Additionally, the Nashville Songwriters Hall of Fame has made its new home in the Music City Center. There is a “Songwriters Square” pavilion and walkway leading to the Hall of Fame and Museum, with song titles and the writers’ names engraved in pavers. This is a fun, free trip down memory lane. It’s also an easy walk to historic Ryman Auditorium, the Grand Ole Opry’s original home.

Ryman Auditorium is open year-round for tours, and during parts of winter, the Opry performs there. Mostly, the show airs from a modern theater adjacent to Gaylord Opryland Hotel and Opry Mills outlet mall. America’s longest-running radio program, the Grand Ole Opry is a great American experience, even for those who aren’t country music fans. Each weekend, guests in the live radio audience experience a range of performers and superstars—from the good ol’ days to the present—while a smooth-voiced announcer promotes the show’s sponsors, as it’s been done since the early days. Even rising stars earn standing ovations here.

The Johnny Cash Museum opened last year as a world-class, fairly compact representation of The Man in Black’s life and career. It’s another example of how even guests who aren’t country fans could find something of interest in Nashville, particularly regarding this fascinating American music icon.

Nashville Municipal Auditorium is the new home to the Musicians Hall of Fame and Museum, which honors musicians from stars to studio players representing all types of music, not just country. The exhibit space is divided into cities with a history of recorded music (Detroit, Memphis, Nashville, et cetera), and each exhibit includes the actual instruments used to record many of the greatest hits.

Part of the Country Music Hall of Fame and Museum’s expansion is the inclusion of Hatch Show Print. After twenty years on lower Broadway, the firm that created and still creates those iconic posters advertising country music shows has moved to a new space inside the museum’s 5th Avenue lobby, open to the public. The shop has a design area featuring interactive educational features such as hand-on demos, a nice group activity.

Many large hotels downtown can accommodate groups. Downtown Nashville is compact, so guests can easily walk from place to place. Several major hotels work well for walking tours or for providing guests many places to explore during their free time. A major new building, the Omni Nashville Hotel, is the headquarters hotel for neighboring Music City Center; a long corridor with shops and dining connects the two. The 800-room Omni hotel has a rooftop pool with stunning views of the city, and the massive public areas have a classy, modern décor, making it an ideal choice for operators.

Near the Omni is Legends Corner, the gateway to the Honky Tonk Highway—a stretch of bars known for their atmosphere and live music, where many careers have been launched. Tour operators should build in free time and point the way for tour guests to walk there to shop, dine, drink, hear live music most any time of the day or night, and try to pick the next country superstar. “Live Music Venue” signs are put up by the city outside of bars and theaters, though in this neighborhood, you could let your ears guide you.

Downtown is also a perfect launching point for attractions outside of the city, including The Hermitage (home of President Andrew Jackson), Belmont Mansion, Belle Meade Plantation, and Travellers Rest Plantation. Take your group to the Parthenon, a replica of the original in Athens, Greece. The building, with a statue of Athena inside, was built for the Tennessee Centennial Exhibition in 1897 and is still a popular tour stop. Nearby are Vanderbilt University and Music Row, a neighborhood home to many record labels and recording studios, plus the Great American Country TV Network.

Another group favorite is a twenty-minute ride from Nashville. Fontanel Mansion is a massive, luxurious log home formerly owned by Barbara Mandrell. Laid-back guided tours allow guests to take guitars off the wall and pose with them, including one signed by the Eagles. Want to emulate Barbara’s song about eating crackers in bed, baby? Go ahead: Lie in her bed and pose holding the (empty) box of crackers from the nightstand.

For group meals there are many downtown restaurants, but we discovered an ideal dining venue, McNamara’s Irish Pub, en route from Fontanel. Its large music room has live music—often by the owner’s fine band—and excellent food in an authentic atmosphere. Country music evolved from Celtic music, and this pub visit carries on the Nashville theme.

That sums up the casual Nashville vibe. Yet with so many new experiences, it’s a challenge to schedule group tours that allow guests to see it all and have time to relax and explore on their own, something easily done when based downtown. Visit Music City is the city’s official visitors bureau and a wealth of support for tour operators coming to the new and improved Nashville.

Written by: Dave Matthews is president of Prime Tours in Dublin, Ohio.