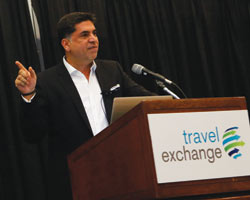 In February, the third Hispanics in Travel Caucus was held in Los Angeles. Sponsored by the Mexico Tourism Board, the caucus featured Carlos Alcazar, president and CEO of Hispanic Communication Network, and other leaders in the Hispanic community, who addressed topics such as faith tourism, adventure travel, and family travel. The growth of this caucus in the past three years draws attention to a niche market with huge potential: the Hispanic market.

According to the National Tour Association, Hispanics from the United States annually spend more than $56 billion on travel. Comprising nearly twenty percent of the U.S. population, with projected growth in their purchasing power and population, the Hispanic market should provide a tempting target for travel agents and tour providers. According to Mandala Research, Hispanics travel in larger groups and spend more per trip than the general population.

How should agents proceed to access this valuable market? Communication is key. Data from the Pew Research Center shows that Hispanics have a high rate of social media usage—for staying in touch with family and friends, as well as research purposes—and a high level of trust in information from the Internet and social media. Communication needs to reflect cultural nuance, however, and addressing language barriers is of utmost importance. At the 2013 caucus, Jorge Plasencia, chairman and CEO of República, an independent advertising, digital, and communications agency, stressed the importance of speaking in a culturally relevant way. He said that when preparing information in Spanish, businesses must look for someone who is “… not just bilingual, but someone who understands the culture. Content should be ‘trans-created,’ not translated.”

When targeting the Hispanic market, an honest, direct approach is recommended: Focusing on needs and promoting how products meet them is a good approach. Marketing that respectfully focuses on traditional values (such as family and work ethic) and language and artistry consistent with Hispanic culture is most effective. Research shows that the Hispanic population tends to value relationships with retailers, and relationships take time to build. In a highly family-oriented culture, the whole family may play a role in the decision-making for a vacation. And it may take a bit longer. In an effort to be efficient, an agent or tour provider may come across as rushing. Don’t make that mistake. Avoid gimmicks that play on cultural stereotypes, as well.

Even in times of economic decline, the Hispanic travel market has grown. This is clearly a demographic group that values the travel experience, categorizing it as a “necessity” rather than a “luxury.” By reaching out to members of the Hispanic community, agents may find that they are able to develop relationships that will span generations.