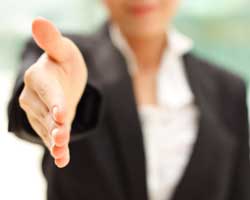 Many women aren’t comfortable dealing with negotiations, even when something they really want (and deserve!) is on the line. Vickie Milazzo shares nine tips to help you stop underpricing yourself and start getting paid what you’re worth. If you’re ready to stop sitting back and start negotiating like you mean it, read on for nine of Milazzo’s tried-and-true tips.

Never let them see you as a commodity. After all, commodities are easy to obtain and easy to replace. And that’s certainly not how you want to be perceived at your job—whether you’re an employee, a leader, or an entrepreneur. If the people you’re working with know that others share your skill set, they won’t have any reason to pay the price you’re asking for. From Day One, do everything you can to ensure that you aren’t seen as interchangeable or dispensable. “Don’t shrink into your chair and become the invisible employee,” Milazzo urges. “Do what you need to do to stand out. Get in the middle of everything and bring new ideas to the table. Build relationships throughout the company.”

Be your own No. 1 fan. It can be hard for women to toot their own horns. To a certain extent, we’re actually wired to nurture and care for others and to put the good of the whole over our own personal interests. While these impulses aren’t inherently bad, it’s time for a newsflash: If you don’t announce your own achievements, you can bet that no one else is going to do it for you. With humility, make sure that you’re keeping your name, your accomplishments, and your skill set in front of everyone. “Have you ever noticed that women tend to downplay their accomplishments, while men routinely highlight their achievements and use them to advance?” Milazzo asks. “Clearly, we females need to take a page from the male playbook and make sure that we’re getting the recognition and credit we’ve earned.”

Ask for everything at the beginning of the negotiation. This can also be a difficult strategy for women to adopt. We don’t want to come on too strong or appear to be overly aggressive, so we don’t put all of our cards on the table at the beginning of negotiations. We tell ourselves that we’ll get the other person used to the idea, gradually. But especially in business, adding on as you go along generally isn’t a good idea, because it makes you appear unfair.  “Consider this situation,” Milazzo asks. “If, for example, you tell a prospect your consulting fee is $150 per hour and his reply is, ‘That’s very reasonable,’ you can’t jump in and say, ‘Well, but what I really want is $175 per hour.’ Think through what you want before you sit down to negotiate. Prepare the list of points you must have and the points you’re willing to give up."

Never let yourself be bullied. Women who aren’t used to negotiating are especially susceptible to being intimidated by a show of force—but even veteran businesswomen can be taken aback by unexpected aggression or resistance! If you find yourself in this situation, remind yourself (once again) that you are dealing with another human being and that you have something valuable to offer. Don’t be afraid to demand respect. And if you consistently don’t get it, well, it might be time to rethink whether you want to work with the other party in the first place.

"Yes, times are difficult for many right now and your odds of getting what you want at work might not be as high as they were five years ago,” Milazzo concedes. “But why give up before you even start? What’s to be gained from that? I believe it’s better to ask and not receive than to not ask and to meekly settle for less than you deserve.”

Written by: Vickie Milazzo is author of Wicked Success is Inside Every Woman