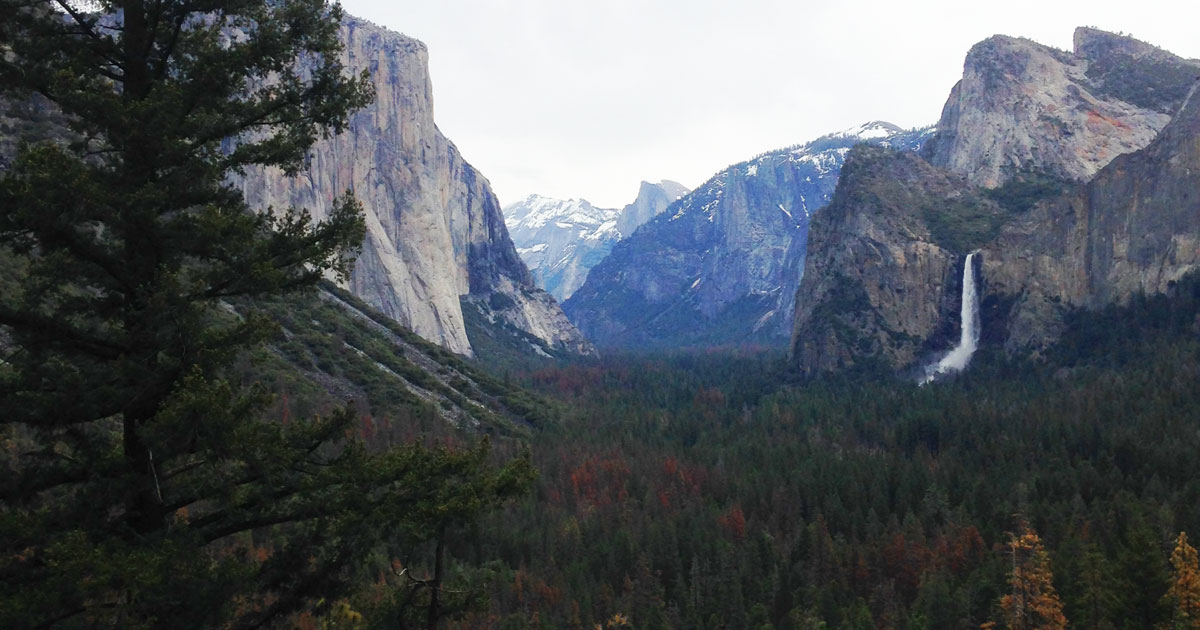 This Wouldn't Look Better as a Lake

"Wouldn't this look better as a lake?"

I was staring out into Yosemite Valley. Half Dome and El Capitan loomed in the distance—two natural landmarks accomplishing what I thought impossible: Make the giant sequoias gathered below look small.

"What?" I turned to the man standing next to me.

"A joke," he said. "Someone once thought this valley would make a great lake."

A few weeks ago, I became one of 3 million people annually who visit Yosemite National Park. I was in Northern California visiting a friend, a California native who made it her mission to give me a tour of the region. Most places we visited were parks, historic sites, landmarks and monuments of the National Park Service.

"I think the national parks might be my favorite thing about the U.S. government," I said as we walked toward Yosemite Falls and passed a group of students seated atop a boulder, engaged in a lesson with a park ranger.

Conservation is often at the forefront of U.S. discussion, so it's old news that the recently proposed U.S. budget suggests cutting the Park Service's budget by 12 percent—nearly $2 billion. Since 1916, the organization has been entrusted with the care of our national parks. More than 20,000 employees work to provide access to natural and cultural resources for education, enjoyment and inspiration for all generations.

While the budget cut likely won't amount to developers turning Yosemite into a lake any time soon, it still concerns me: The Park Service represents one of our nation's best efforts to preserve and explore our history.

"National parks are the best idea we ever had," wrote author Wallace Stegner in 1983. "Absolutely American, absolutely democratic, they reflect us at our best rather than our worst."

Anyone can enjoy them.

I'm a cliché Midwestern girl, so hugging a Redwood was on my bucket list. My friend took me to Muir Woods, a primeval forest that has been protected as a national monument since 1908. I like hiking, but I know hiking isn't possible for everyone. My friend promised "perfectly manicured trails," and she was right: The Park Service makes our country's natural wonders accessible for anyone. From a young boy whimpering over a sliver in his finger to a couple of elderly women with walkers, people of all ages and physical abilities wandered the trails surrounding the giant Redwoods.

The San Francisco Maritime National Historic Park wasn't on our to-do list, but as we walked through Fisherman's Wharf, we saw a ship that looked a lot like a pirate ship—and we couldn't resist. It wasn't a pirate ship: Balclutha is an 1886 square-rigger that carried goods around Cape Horn 17 times. On deck, a park employee was shouting commands to a group of students.

Another group gathered on the tween-deck, learning about San Francisco maritime history.

We can't replace them.

Black Chasm Cavern in Volcano, California, was designated as a National Natural Landmark by the Park Service in 1976. The cavern is famous for its helictite crystals—glistening, translucent formations that look like they were grown in zero gravity, and so delicate they're rarely seen in caves accessible to tourists. At the time, Black Chasm was slated to be quarried as an open pit mine for gravel the bedrock would provide. After the National Natural Landmark status was granted, the landowners felt compelled to preserve the cavern. Today, student groups could descend into the caverns for a firsthand geology lesson. No textbook picture books needed.

The services the Park Service provides our nation is priceless, and they need support to continue caring for the more than 400 national parks. The organization needs resources to maintain trails, clear winter damage, preserve relics of the past, and so much more in order to educate students.

I never had a chance as a student to explore the national parks with my classmates, but I would've loved the opportunity—and I'll gladly be a tree hugger for life if it means future generations can hug a Redwood, too.