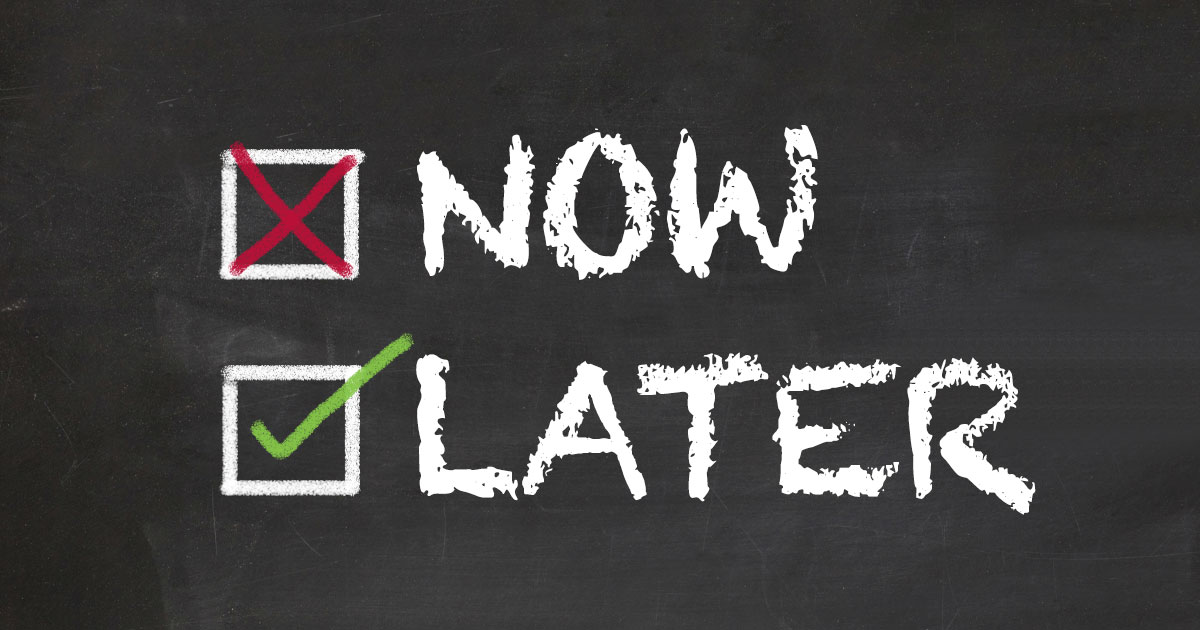 To Pre-Crastinate or Procrastinate, That is the Question

Adam Grant's New York Times article "Why I Taught Myself to Procrastinate" piqued my attention. I was blown away. Is there a potential downside to being "responsible?" Do the "slackers" of the world know something I don't? I thought the topic deserved further exploration. Here is what I learned.

1. Pre-crastination defined.
Psychologists have been comparing the attributes of pre-crastinators and their procrastinating counterparts for years. Pennsylvania State University psychologists define pre-crastination as "the tendency to complete, or at least begin, tasks as soon as possible, even at the expense of extra physical effort." Procrastination is defined as, well, I'll get to that later...

2. Both pre-crastinators and procrastinators could have obsessive-compulsive tendencies.
A procrastinator might employ delay tactics for fear of jumbling a task. If perfectionism cannot be guaranteed, these individuals often cannot start the task at all. The pre-crastinator takes a different, albeit similarly obsessive approach. He or she cannot wait to start a task. The simple thought of an assignment hanging over her head brings on a near visceral reaction. Yep, I've been there.

3. Delayed decision-making may produce dynamic results.
Creativity cannot be forced. There is a reason for the term "creative process." When I'm given an assignment that requires creative thinking, I face it head on. Others go for a run. At first blush, these runners may look like slackers. But in reality, they are just productive procrastinators. The run helps them clear the clutter from their heads and when they reach their stride, poof! A perfectly creative idea emerges. This is similar to the saying, "sleep on it." Work assignments–and the day-to-day challenges of life–typically make more sense in the morning.

4. Procrastinators should fill their down time wisely.
Just because you aren't working, per se, doesn't mean you should be wasting time. I believe there is a difference between habitual procrastination and professional procrastination. The former twiddles his or her thumbs, while the latter fills his non-work time with productive pursuits. After all, if you delay your entire to-do list, you may feel you are carrying the weight of the world on your shoulders–and that can't be good for creativity.

5. Patterns aren't easily changed.
I can to admit my pre-crastinating ways, but changing who I am won't be easy. The same goes for procrastinators. In truth, we all need to find a happy medium. In this middle ground we will find joy, creativity and balance.

To read more on this interesting topic read Adam Grant's New York Times article "Why I Taught Myself to Procrastinate." The pre-crastinator in me says, "Click on the article right now!"