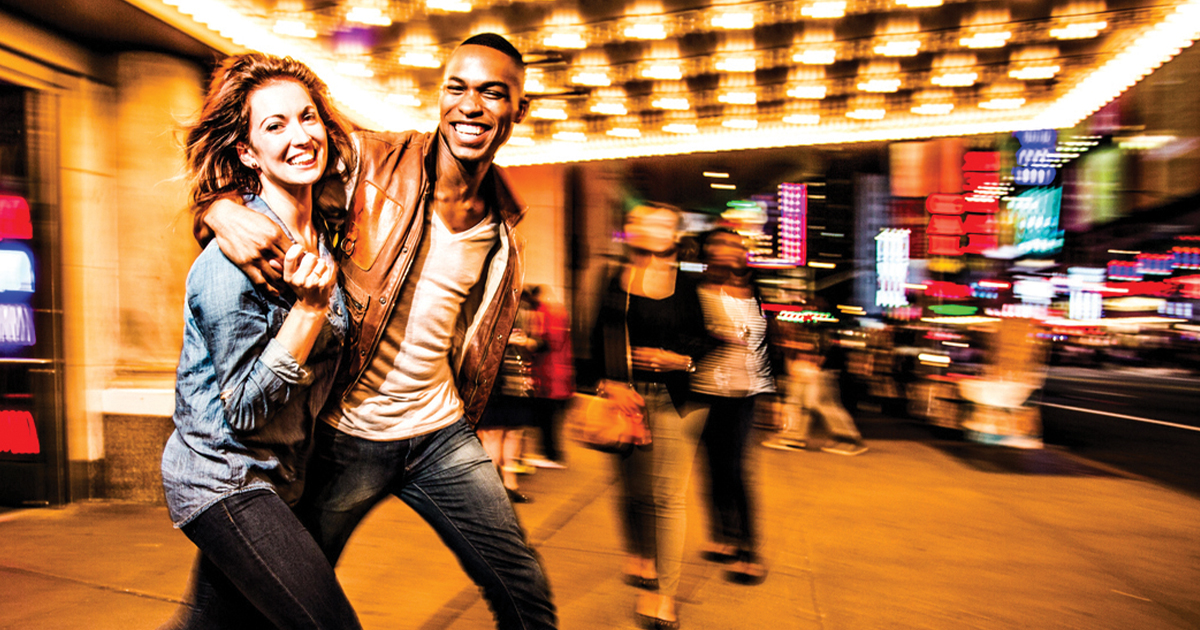 The Triumphant Return of Broadway

During the COVID-19 pandemic, the stage lights on Broadway and beyond were collectively dimmed, creating an unsettling and unfamiliar stillness we'd never before experienced. Now, the long, arduous intermission is over and the lights are shining as performers return to the stage to once again bring stunning art to the masses in-person.

As we celebrate the glorious return of Broadway and what that looks like for visiting groups, we also acknowledge the power of performing arts to resonate far and wide—through good times and bad—along with the undeniable resiliency of those who make the magic we see on stage a reality.

Broadway is back, baby.

One thrilling aspect of performances returning to stages across the country this fall is hearing which shows are on the docket. The good news? Nobody says you only have to choose just one.

"At present, we have over 30 shows confirmed to begin performances again in 2021," said Stephanie Lee, President & CEO, Group Sales Box Office at Broadway.com in New York City. Many group-favorites are making their return, including Chicago, Moulin Rouge, The Phantom Of The Opera and Wicked. "Insider tip: Hamilton is offering more group access than ever before! It's the perfect time for your groups to secure one of Broadway's hottest tickets."

The enchantment of Disney is never too far away, thanks to Disney on Broadway welcoming back well-loved and iconic productions of Aladdin and The Lion King in September, in addition to North American tours of Frozen and The Lion King.

"What is most notable is that so many shows are opening, it's all coming back much faster than what we initially expected," said Bob Hofmann, Vice President, Broadway Inbound. "Shows like Tina – The Tina Turner Musical, Company, Mrs. Doubtfire, and SIX—which had barely begun in March of 2019—will be back this fall and we are looking forward to new shows like Diana The Musical, MJ, Paradise Square and of course the revival of The Music Man, starring Hugh Jackman and Sutton Foster."

Across the country in the heart of Hollywood at the Dolby Theatre, groups could expect to see shows like Lerner and Lowe's My Fair Lady, The Band's Visit, The Simon & Garfunkel Story, the Rent 25th Anniversary Farewell Tour, Tootsie, Pretty Woman: The Musical and more. Don't forget: about a mile down the road is the Hollywood Pantages Theatre, which is also welcoming back shows like Hamilton and Moulin Rouge.

In Chicago, groups will also find all the entertainment they could ask for when it comes to upcoming shows: Beautiful – The Carole King Musical, Come From Away, Jesus Christ Superstar and more.

As we've all come to know this past year and a half, things have constantly changed and situations have been fluid. Thankfully, the overall life-changing experience that only Broadway can provide hasn't changed.

On July 30, The Broadway League announced that audience members will need to show proof of full vaccination against COVID-19, in addition to mask wearing, inside all 41 Broadway venues. Those who meet exemption requirements will be required to show proof of a negative COVID test in the form of a PCR test taken within 72 hours of the performance or an antigen test within six hours.

"Safety is the number one priority, and your group members should feel assured that every person in the theater, both in the audience and behind-the-scenes, will be doing everything they can to ensure a safe return to Broadway," Lee said, adding that theatre owners are closely following state and CDC guidelines, and will be making decisions ahead of all performances that are reflective of the current situation. "All policies will be thoroughly communicated to group leaders in the weeks leading up to the shows."

Lee emphasizes that the entire Broadway community has been waiting in the wings and are ready to share these experiences again.

"Coming out of this shutdown, the anticipation of experiencing live theatre together will be extraordinary and audience members are going to feel that the minute they enter a Broadway theatre," Lee said. "Beyond having a thrilling shared experience, audiences might expect differences like staggered curtain times, digital tickets, more flexible payment options, among other options still currently under consideration. Bring your tissues, it's going to be an incredibly emotional return to Broadway!"

Hofmann says he loves that so many new shows are opening on Broadway and that many of them have been created by BIPOC authors and artists.

"The city that never sleeps has been taking a power nap and is now rising, revitalized and ready to go—groups will feel that energy making a trip to NYC and Broadway more exciting than ever," he said. "I've always been moved by the atmosphere filling the streets just before curtain time on Broadway as actors, audiences and artisans alike converge, making their way into the theatres, preparing to share in the experience of live theatre. Expect that same unique and magical experience but heightened."

WHAT TO KNOW BEFOREHAND

Luckily, flexibility is the name of the game these days, putting tour operators and planners at ease. While planning, they could expect to find perks like flexible and generous refund and exchange policies, priority seating, ticket bundling, flexible payment terms, attractive pricing for groups of all sizes and budgets, and more.

Disney on Broadway has introduced a suite of added benefits for groups, including the new "Name Your Price" offering, aimed at helping groups book tickets that match their budget. Digital ticket delivery for groups is also now available, with group rates now starting with only 10 tickets.

"After 18 months of being apart, we are thrilled to welcome our audiences back and are proud to introduce these unique benefits to make buying Broadway tickets risk-free, flexible and affordable," said Thomas Schumacher President & Producer Disney Theatrical Productions.

Communication is also clearer than ever.

"Plan in advance, follow the updates and over-communicate with your group," Hofmann said, noting that what is required to enter a theatre today will be different tomorrow and in the coming months, but groups should have no doubt they will be kept informed. "Updates will be sent as they become available and particularly for the specific performance your group is attending. Most important, we are here to help. Ask us anything and we will help make sure your guests are informed and ready to enjoy the show!"

Groups are also able to take advantage of attractions which have reopened nearby their chosen venues, as well.

"The amazing variety of restaurants, shopping choices and other iconic Hollywood attractions within walking distance of both of our theatres will also be as exciting as ever for our groups—from old favorites like Madame Tussauds and The Hollywood Walk of Fame to new additions like FUNKO and Amoeba Records," said Jay Burns, Director of Outbound Sales for Broadway In Hollywood.

EXCITEMENT IS THROUGH THE ROOF

"The return of touring Broadway is important on so many levels," said Burns. "The shared group experience of live theatre performance brings family and friends together, creating a connection like no other."

Through Broadway performances and the characters presented, we see ourselves—often in unexpected ways—and are provided with perspectives different from our own.

"No matter who the audience member is, there is a perfect Broadway show that will resonate with them," Lee said. "A show that will reflect their experience, their joys, their pains and leave them a different person than when they first sat down. That experience cannot be found anywhere else, and we are so excited to be able to welcome people back again."

Broadway is always the top experience on many group itineraries, and for good reason.

"Many have said that New York isn't back until Broadway is back," Hofmann said. "We are the heart of the city and one of the uppermost experiences travelers from all over the world expect to share in when visiting. Groups are key to Broadway's success and Broadway is key to any group's experience of NYC. It's time to be back, fully open and with arms wide open to welcome each other back to New York and Broadway!"

We'll see you there!

This article originally appeared in the Sept/Oct 2021 issue of Groups Today.